Welcome to the SeeMeCNC Community

Have a look around and join now!

The ORION has worked great out of the box and required zero tweaking so far. The only complaint I could have had with the printer is that when idle, it was producing a pretty jarring fan noise. I suspected the power supply fan.

Also, I was looking for a solution to light the print area while printing, since most of my printing happens at night and normal room light doesn't give you much detail on the print - especially that crucial first few layers.... I've looked at print-head mounted lights, since I thought that was a very clean and nice solution, but didn't like the idea of cluttering up the print head.

So, here's what I ended up doing to my printer today:

Power supply wires trimmed
Removed the power supply and checked the fan - it's fine. In the process, I cut off every single non-essential wire. I opened up the power supply and cut the wires as close to the PCB board as I could to prevent any shorts. I left 1 set of GND/12V/5V wires for later. Everything else went away (MoBo connector, hard drive connectors etc.). This really cleared out the wiring space under the ORION.

40mm fan replaced & connector soldered to RAMBo
Replaced the 40mm fan behind the RAMBO board with a new one. Turns out that little fan was making awful noises, not the power supply. The fan swap *could* have been pretty straight forward, but unfortunately, the fan wires are soldered to the PCB. Not only that, they are soldered on with some solder made on Krypton or something. It was a huge pain de-soldering everything and getting the through-holes restored. I soldered in a fan connector socket.

Here's what I ended up with (see white connector, bottom right): 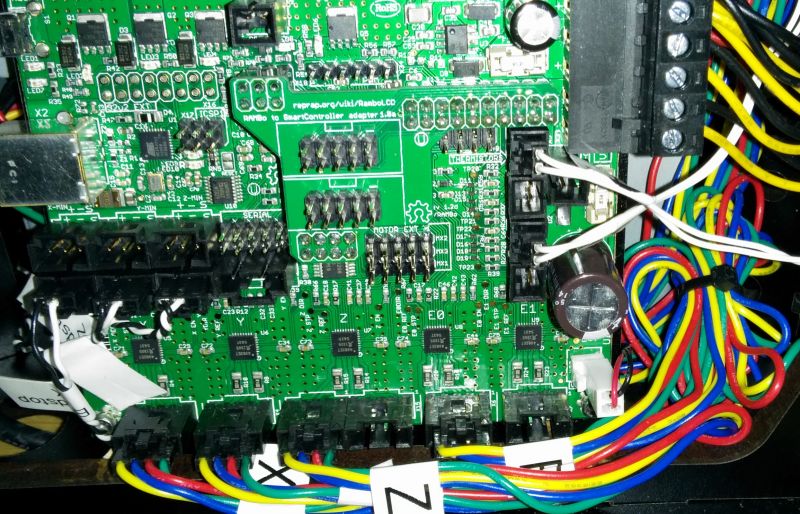 I would *REALLY* recommend, that SeeMeCNC/UltiMachine make that header connector standard.

Moved power switch
I really like how modular and easily accessible everything on the ORION is. Everything can be opened up, taken off etc. very easily. Except for the LCD panel... The ON/OFF power switch is screwed to the LCD panel plexi-glass. To be more easily accessible, I removed the switch from the panel and instead drilled a hole next to the bed and put the switch right next to the bed (see below).

Let there be light!
Then there was the light issue....
From a previous project I have reels of LED strips laying around. Since I don't want anything hanging on the print head, but need light low enough to see the first few layers, I came up with this:


This video also shows off the new location of the power switch (RED) and the new light switch (WHITE).

Here's a closer look at the LED strips and their location: 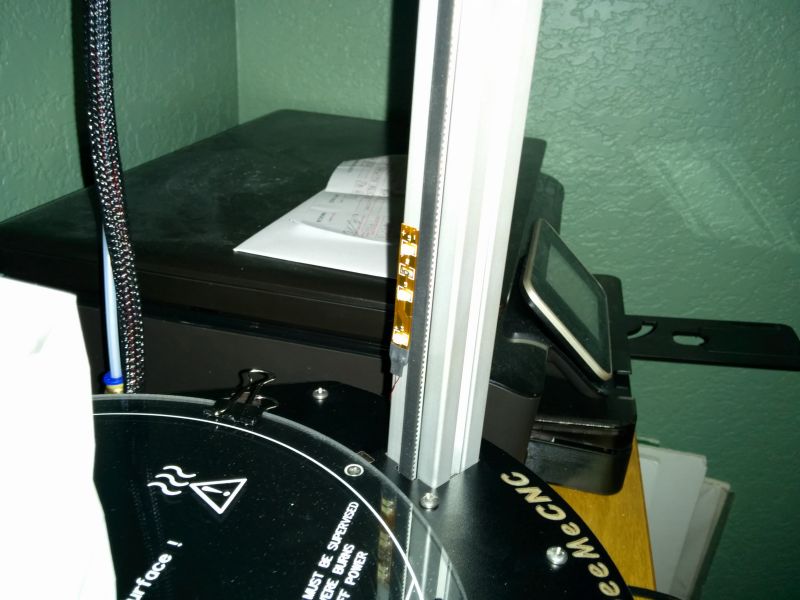 And here's a still photo with the printer in action (excuse the blur, I'm printing pretty quickly right now 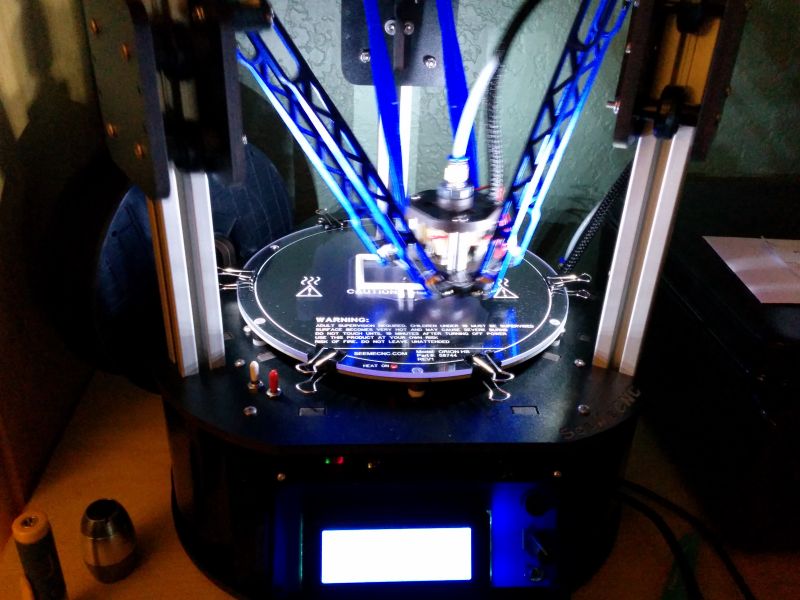 All this took way longer than I had anticipated, but to me, it's totally worth it.

CONGRATS, I think you're the first in hundreds of Orions to get the "Hacked" badge!!! I love those LED's, man those are bright! We've been looking at lighting etc... and I don't want to clutter up the hotend either, I like the down low approach for sure. Also, we're working on a new power switch and relocation, as I agree that mounted on the faceplate is less than ideal for removing it

johnoly99 wrote:CONGRATS, I think you're the first in hundreds of Orions to get the "Hacked" badge!!!

Thanks!
Yeah, I noticed not a lot of ORION love around here

I love those LED's, man those are bright! We've been looking at lighting etc... and I don't want to clutter up the hotend either, I like the down low approach for sure.

You can barely tell from the picture that shows the LED strip, but I used very thin magnet wire and ran it straight down the side-slot in the aluminum extrusion. Essentially, the wire is not visible unless you specifically look for it.

Also, we're working on a new power switch and relocation, as I agree that mounted on the faceplate is less than ideal for removing it

Sweet! You guys did such an awesome job making this design modular and easy to work with. As a result, the power switch location sticks out like a sore thumb

int2str wrote:Yeah, I noticed not a lot of ORION love around here

It's a new model and less people have them so far, that's all. Wait until the Orion is a year old like the Rostock almost is and I bet you'll be surprised by the strong forum presence. Looks like you're shaping up to be the Orion guru anyway - better learn all that you can before the stupid questions start

I really like your led's, that is one nice mod!
Boss 1 - "I'm tiered of arguing with you! You come up with the MOST Stupid-Outlandish-Impossible way to do something & then you walk out into the shop and DO IT and IT WORKS. Its no fun anymore."
Boss 2 - "Huh? Chris is a Ninja?"
Top

Congrats on coming up with the idea of the LEDs they look great on there.
Top

Nice job, if I have some time I might give the LED mod a shot. I'll been using my cell phone flash light in the meantime...

More updates are in:

Did the cork dampers make that much difference and if you would, could you identify the power supply you used?
I am not an Orion user yet, but I will be soon. I hope to wait now until they move that power switch. I never did like where it is now.
Thanks for putting all this on the Forum. Great ideas for others!
Top

I have mine but haven't installed them yet. Were they drop in or did you have to make some adjustments (firmware or otherwise)?
PTMNBN="Printer that must not be named" - a heavily upgraded Replicator 2
Top

"that much" is hard to quantify. To be fair, I would have to say that the printer is definitely more quiet now. But as I mentioned in my other thread about them, I don't think it's worth it on the ORION. Installation is quite tricky - not sure it out weighs the reward.

could you identify the power supply you used?

The pictures don't do it justice as to how small this thing is.
I will snap some photos soon to show it's mounted.

jmpreuss wrote:Were they drop in or did you have to make some adjustments (firmware or otherwise)?

They are more or less drop-in. I did adjust the Z-height, verified the bed level and slightly adjusted the printer radius as a result.
The arms are very nice.

My ORION produced great prints right out of the box with all stock parts. But the carbon arms are definitely very nice. They remove what little slop there was with the stock arms.
Top

The pictures don't do it justice as to how small this thing is.
I will snap some photos soon to show it's mounted.


Expensive but the modularity and the 37 Amp Rail makes it worth it. Looking forward to the pictures. Thanks!
Top

Here's the current state of my hot-end + effector plate. Re-printed the E3D mount in black (was blue), replaced the nylon spacers with metal ones and of course added the Tricklaser arms:

The new heater block for the E3D was tapped & threaded to receive an eBay screw-in thermistor:

The RAMBO received heatsinks for the stepper drivers:

And the new power supply was mounted, opening up the space inside the ORION tremendously!

Also, I designed custom clip-on light strip mounts since, as it tuns out, glueing the LED strips straight to the extrusion can interfer with the cheapskate movements..... oops

are those RGB or just white?
Top

White. See first post in this thread for images/video.
Top

Those clip on brackets you designed would be a great addition to our collection at Thingiverse.
That is a great idea! If you don't want them on Thingiverse would you be willing to post the STL here?
And you are right, using that power supply made a HUGE difference to the interior of the Orion. Not only does
it look better it has to increase the ventilation within the whole machine. Excellent idea and implementation.
Top

When you changed the power supply, did the new one use the same mounting as the old one or did you have to make
any mods to get it to mount?
Top

if you want to also post it to repables.com a non {shudder} makerbot site.
Top

The LED clips have been posted on Repables (wish I could edit my posting....) and Thingiverse:
http://repables.com/r/194#
http://www.thingiverse.com/thing:239812

Eaglezsoar wrote:When you changed the power supply, did the new one use the same mounting as the old one or did you have to make
any mods to get it to mount?

The power supply comes with an ATX power supply mounting adapter. So it fits in the same location using the existing screws. But because it is much shorter it's only attached to one side. Which again make it a lot easier to get the power supply in/out and mounted.
Top

g.
Delta Power!
Defeat the Cartesian Agenda!
http://www.f15sim.com - 80-0007, The only one of its kind.
http://geneb.simpits.org - Technical and Simulator Projects
Top

Hey great work. I wanted to see what shroud you used for the part fan. I have tried the Guanu Blower Fan Holder Shroud and that worked great with the stock unit but that is not working for the E3D since the carriage is much closer to the bed.

Return to “Mods and Upgrades”