Welcome to the SeeMeCNC Community

Have a look around and join now!

Recently by adding these mods to my Artemis 300 I was able to go from 25mm/s to 70mm/s print speeds on a .8mm nozzle. I've got a 1.4mm coming in and can't wait to really get moving!

Installing the Jet Mod:
Step 1:
Remove the screws (A) holding your Y adapter (B) in place and remove it. You will need a Phillips 1 or 2 screwdriver. If you do not have a Y adapter, skip this step. 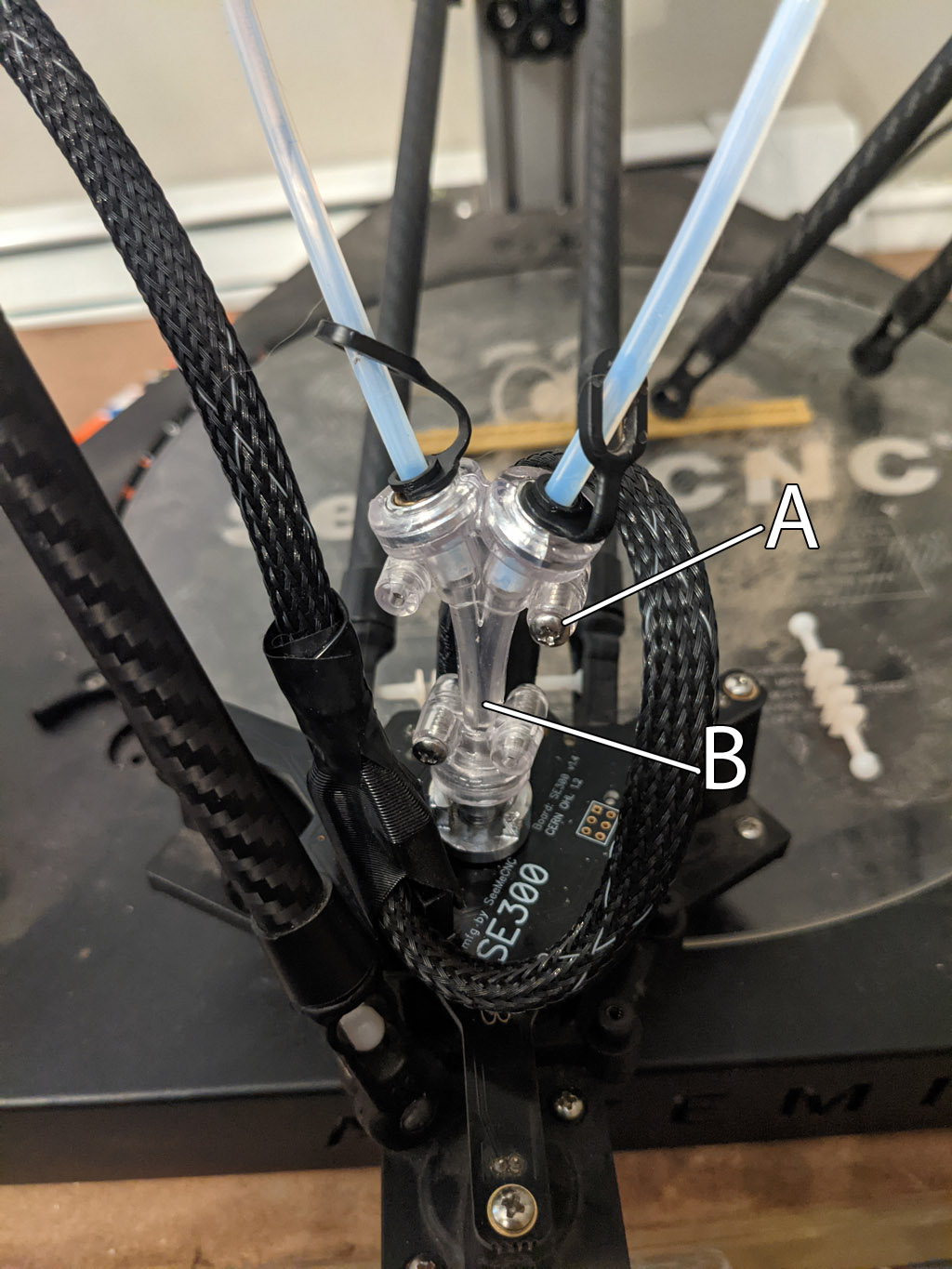 Step 2:
Detach the data and heater cables from your SE300. They are both press-clips, so find the small latch and press inwards on them. Below is an image of the Adapter Throat and the remaining plugs (A). 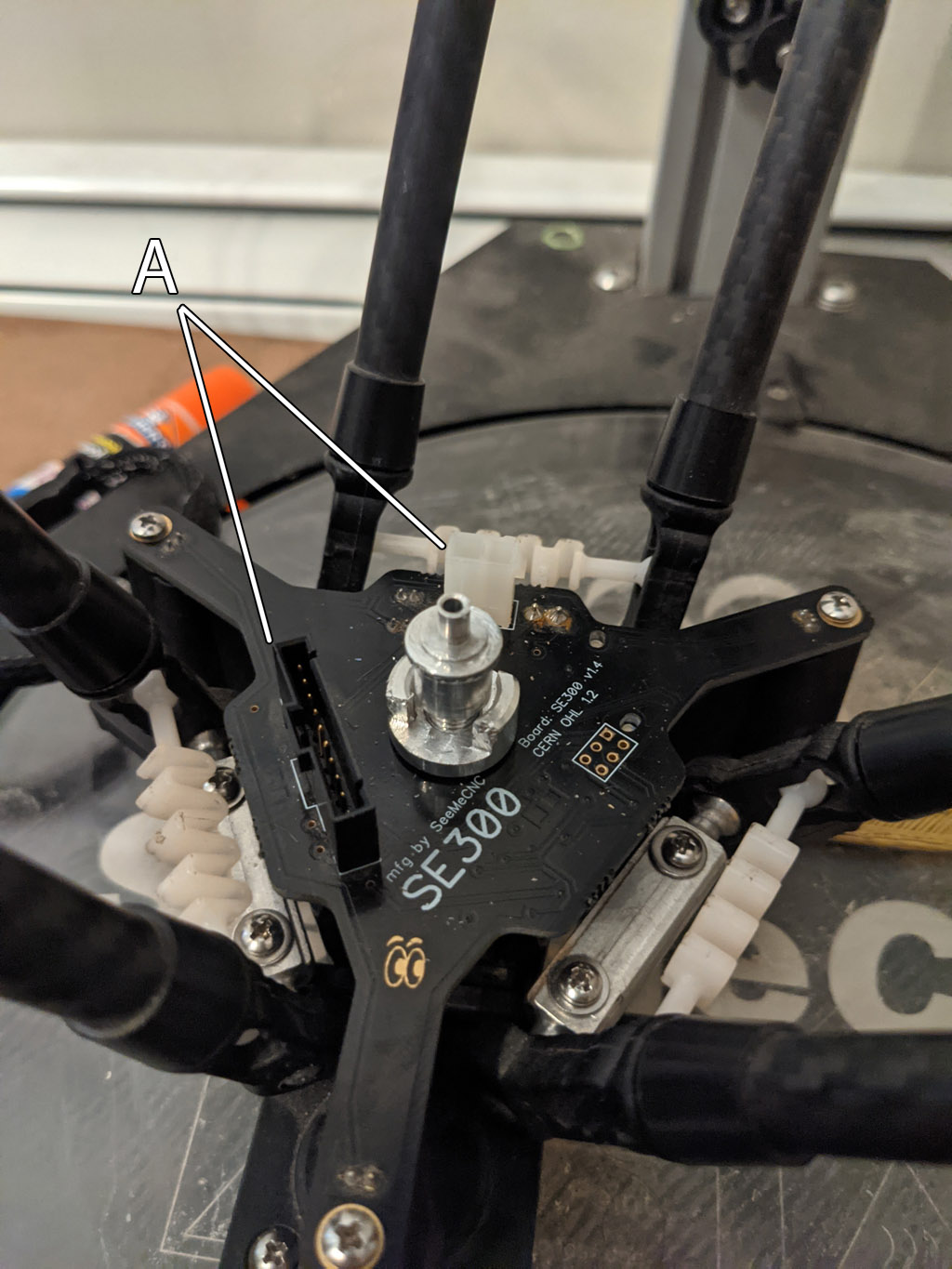 Step 3:
Unscrew the Adapter Throat. If you are using the Y-adapter then the supplied loosening tool will not fit down over it enough to release the nut (A). I've found that positioning pliers like so (or more vertically if possible) and twisting counterclockwise will provide enough leverage. 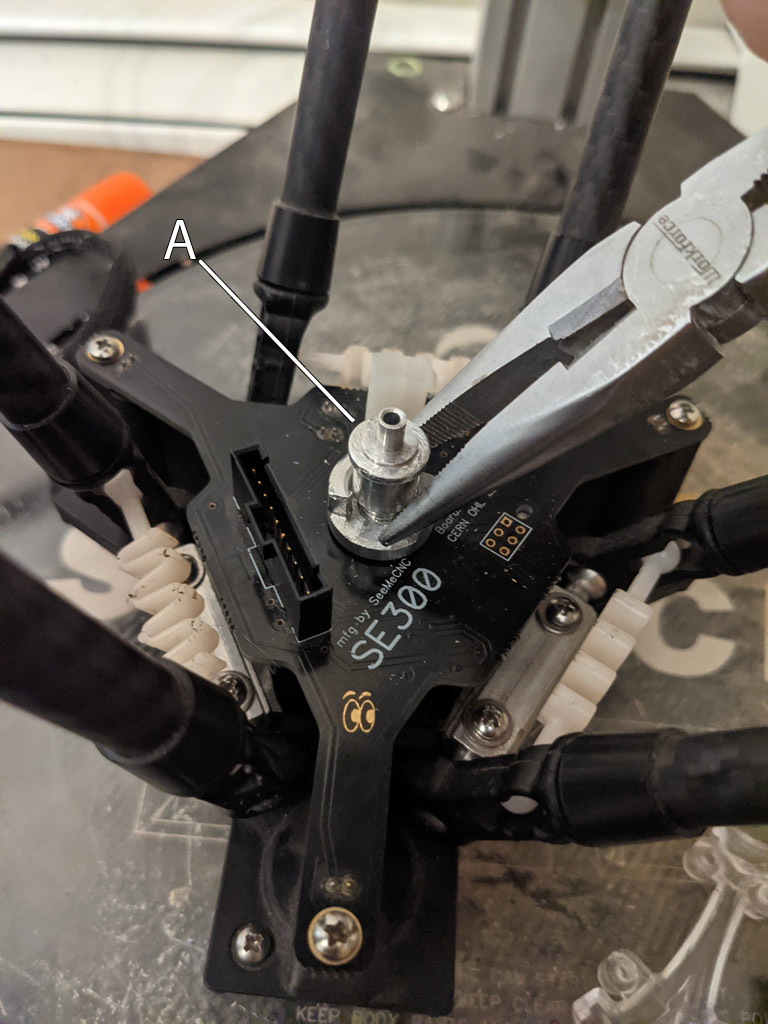 NOTE: If you have not done this before this may require a large amount of force. If it is difficult to take off, please take the SE300 off of the control arms. It will make your life a lot easier and prevent damage to the machine! Grip the SE300 around the inner perimeter of the Accelerometer Board or by the base of the hotend itself.

When re-attaching this nut to the board, screw it down to thumb tightness only to make it easier to remove in the future.

Step 4:
The official instructions say not to use the Jet Mod for PLA and I believe this is because the jet has a very large gap around the filament hole. The Jet will allow heat to creep higher up into the filament path and PLA could soften prematurely and deform, causing a blockage at this point: 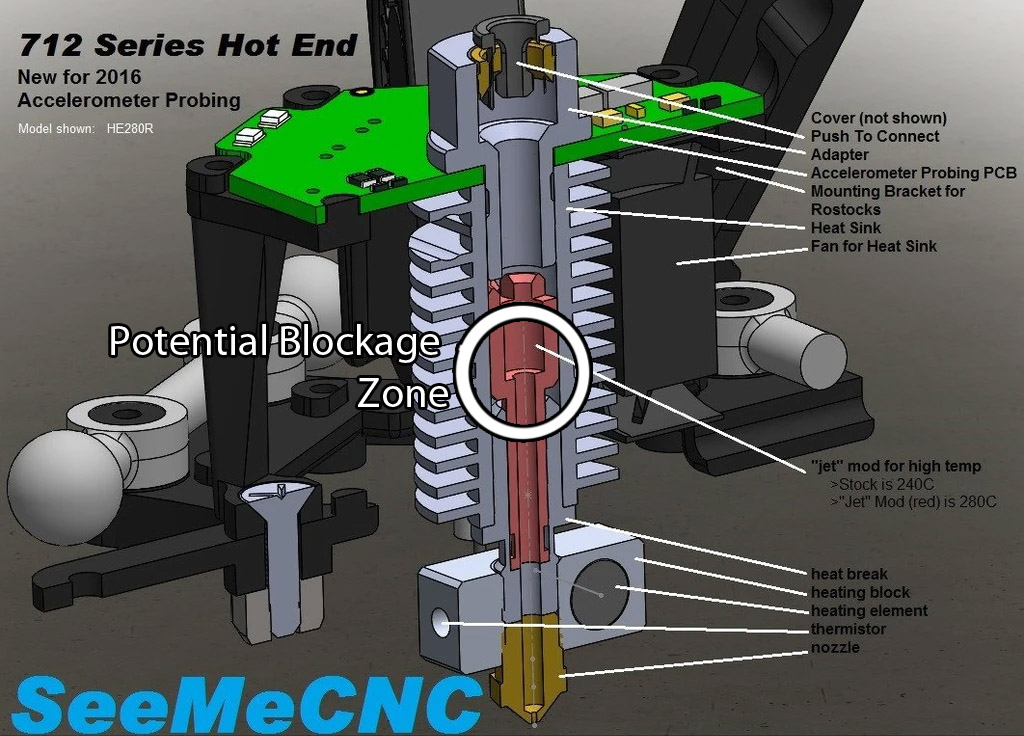 What we are going to do is cut a short length of PTFE to help guide filament from the Adapter Throat down into the channel properly. This will allow us to bring heat further up in the filament path, keeping more energy in the system and letting us print faster.

You will need to cut a small piece of PTFE liner down to about 22 mm: 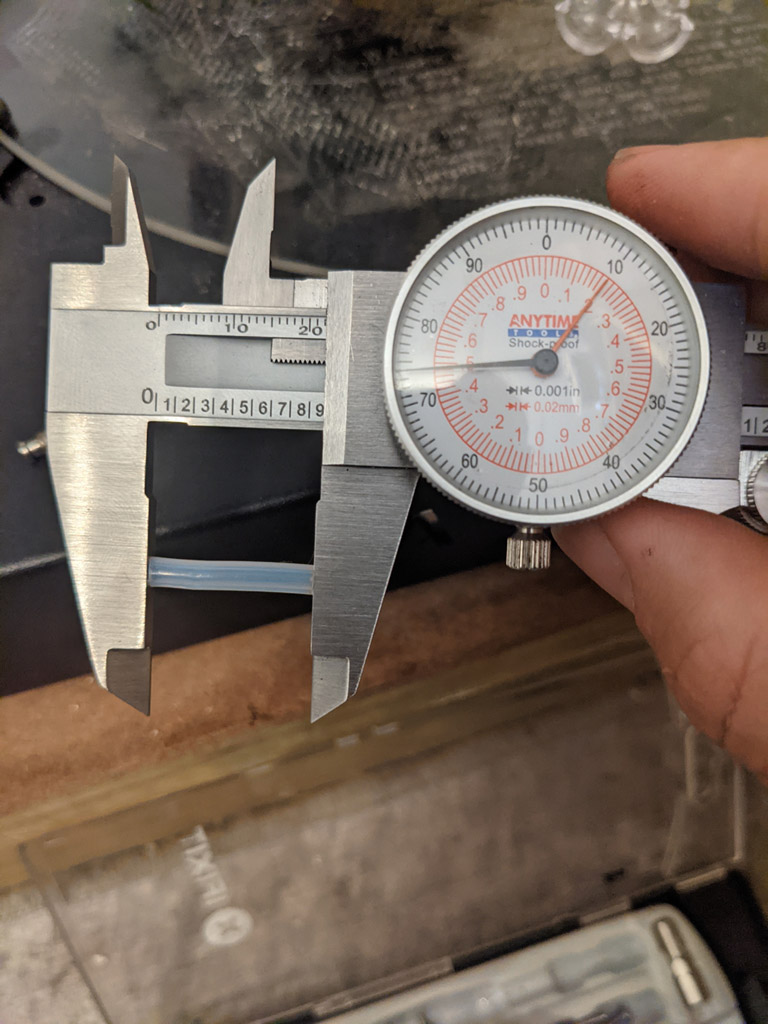 Use an Xacto blade or a box cutter for this step. Using a pair of scissors will crush one end of the PTFE, which will cause it to jam. You may need to drill out your PTFE liner if the printer starts skipping steps with no extrusion as this means that it's catching on the lip of the liner near the top.98

While the PTFE tube is higher up in the hotend and within the heatsink, there is no guarantee that once the hotend is heated up to past 250°C the PTFE liner will not start to break down. Print with high temp materials in this arrangement at your own risk. If you do not want to include this part of the mod then consider these instructions to be for installing the Jet mod only.

I have run a test where I ran the hotend at 240 C for about 3 minutes, then turned the machine off and pulled the tube out. It was about the same temperature or a little cooler than the Adapter Throat. So it is unlikely to cause a problem, in my opinion, but you have been warned.

Step 5:
We will now assemble our new filament path, but first let's take a look at what it is: 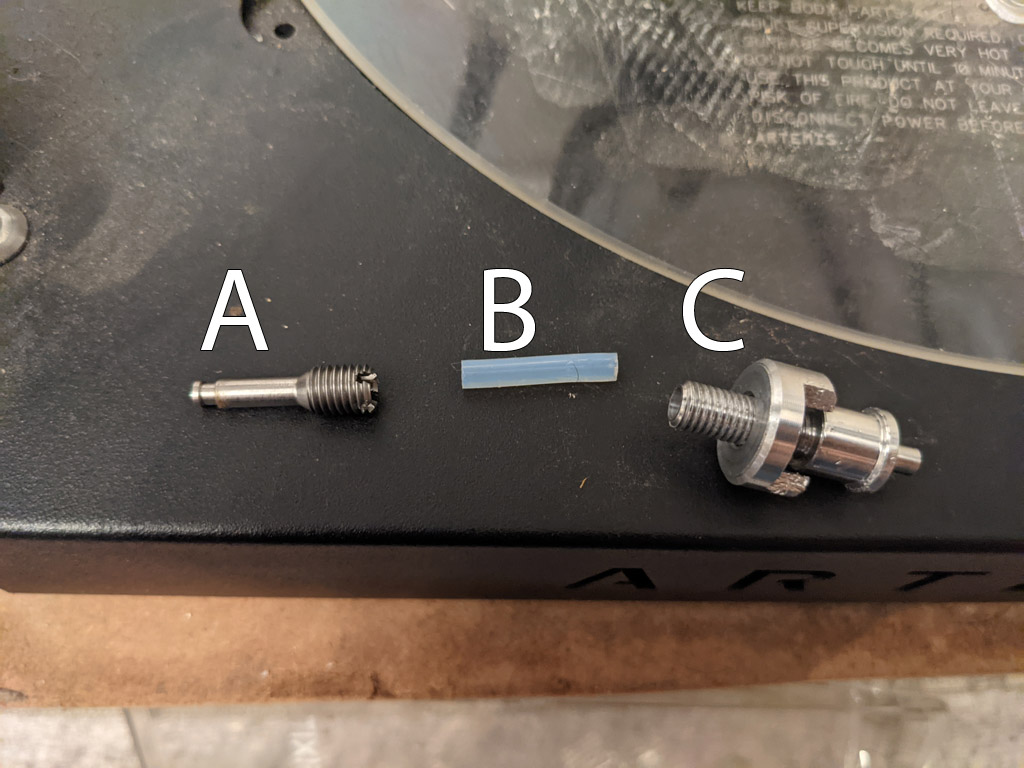 There is the Jet Hot End (A), the new PTFE liner (B) and the Adapter Throat (C). Assembled inside the hotend they will look like this (gap enlarged for demonstration purposes): 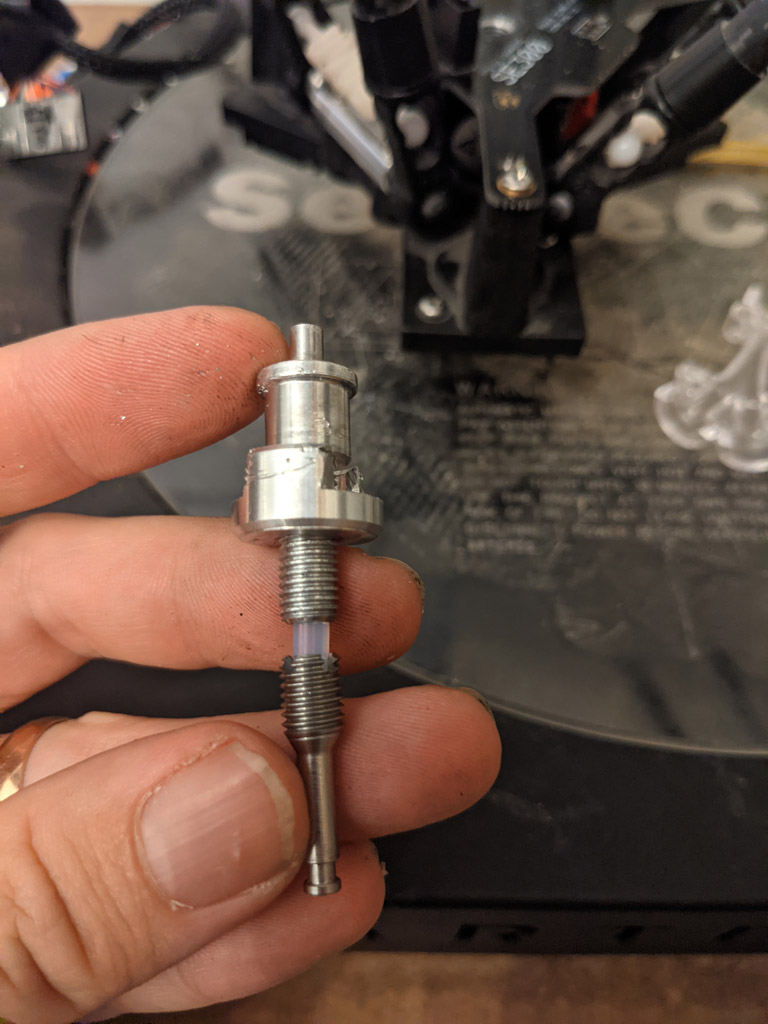 Step 6:
Insert the Jet mod nozzle into the assembled SE300. Note that you might need to let the SE300 rest on the plate while attached to the machine in order to get access to the throat of the Heatsink. Without the Adapter Throat and Nut, there is nothing holding it vertical. Use a wide flathead screwdriver to screw the Jet Nozzle in (1), then install the PTFE liner (2). Finally, reinstall the Adapter Throat and Nut, finger-tight to make it easier to remove in the future. Reinstall your adapter.

Note to SeeMeCNC: Not sure of the design reason but would it be possible to narrow the bore of the Jet Mod (remove the countersink at the top), chamfer the entrypoint and include it as standard on all SE300s? That would help the filament get in without jamming and mean that the printer wouldn't need any mods to print high temp materials!

Replace your Y Adapter or single extrusion adapter and you're good to go!

This is pretty easy, but my images aren't very good so I will draw on some CNC stock photos.

Step 1:
Remove the SE300 from your printer by first removing the white Tension Springs for the arms: Just push one ball of these away from the other. This will disengage it from it's pocket in the arm. Once disengaged, move it towards the larger hole in the arm (circled) and it should slip back towards the other ball. 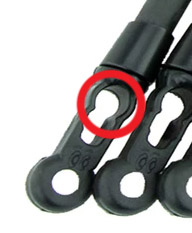 Step 2:
Once your entire SE300 is removed we will start on replacing the hotend: Step 3:
While I removed my entire Accelerometer Board from the rest of the assembly, I don't think you have to do this: 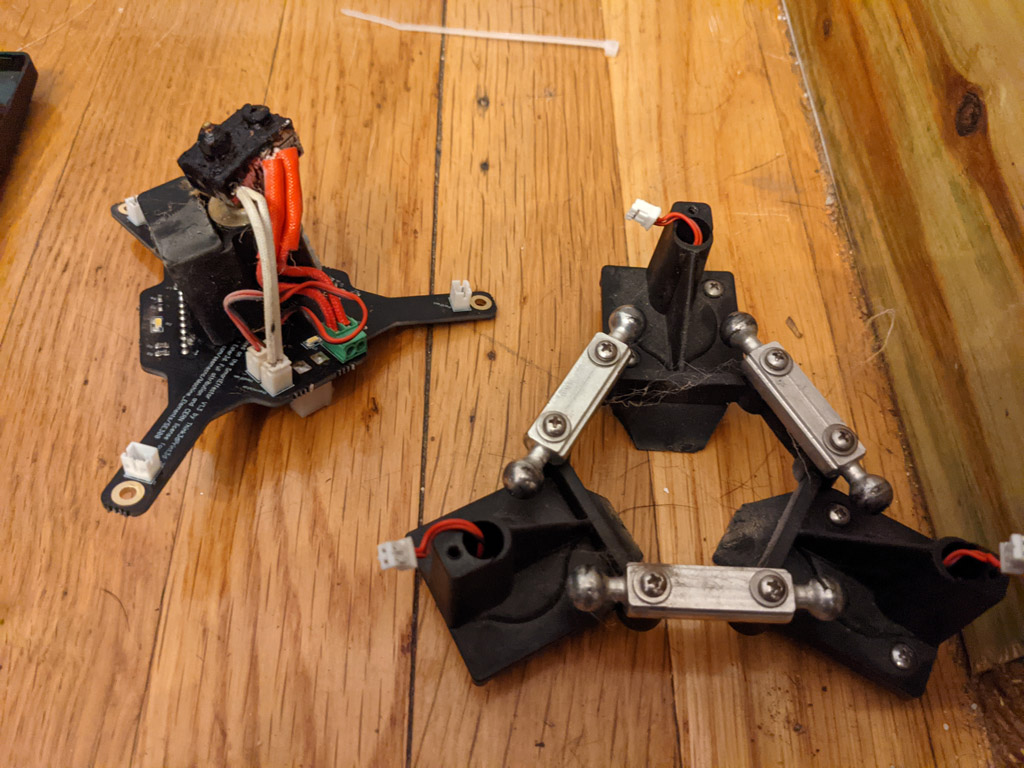 If the steps below do not work however, you can simply remove the Accelerometer Board by taking off the screw at each corner and unplugging it from the fans.

What we will do, however, is remove the screw (A) that squeezes the Heater Block together to retain the Heating Cartridge. We will also remove the grub screw (B) that holds the Thermistor in place. These can be more clearly seen on a fresh Heater Block: Remove both screws. The A screw is a Philips head and the B screw is a hex head, though both are 3mm.

Turn the Heater Block counterclockwise to remove it from the Heatsink.

Insert the Heater Cartridge and Thermistor into the new e3D Volcano heater block: Clamp down the block on the cartridge and thread in the grub screw for the thermistor.

Unscrew the Adapter Throat and Nut from the Heatsink. This will allow it to spin freely for the next step.

Thread the Heater Block onto the Heatbreak by turning the Heatbreak. If this cannot be done, just take it out of the assembly and thread it together separately. Be careful with the fan wires! Also, once the Heater Block and Heatsink are screwed together the Thermistor and Heater Cartridge cannot be accessed, so they need to be secured in place BEFORE attaching the heater block and heatsink.

Screw it all back together and reconnect your cables!


Sorry this last piece doesn't have as many photos but if something's unclear please let me know and I'm happy to correct!
Top

Just wanted to post an addendum to this; the Jet nozzle makes it difficult for the PLA to enter the orifice consistently and frequently results in binding, which I believe is probably the reason for why it's only recommended for high temp filaments, which would keep their rigidity further up the heat break and would be able to enter it consistently.